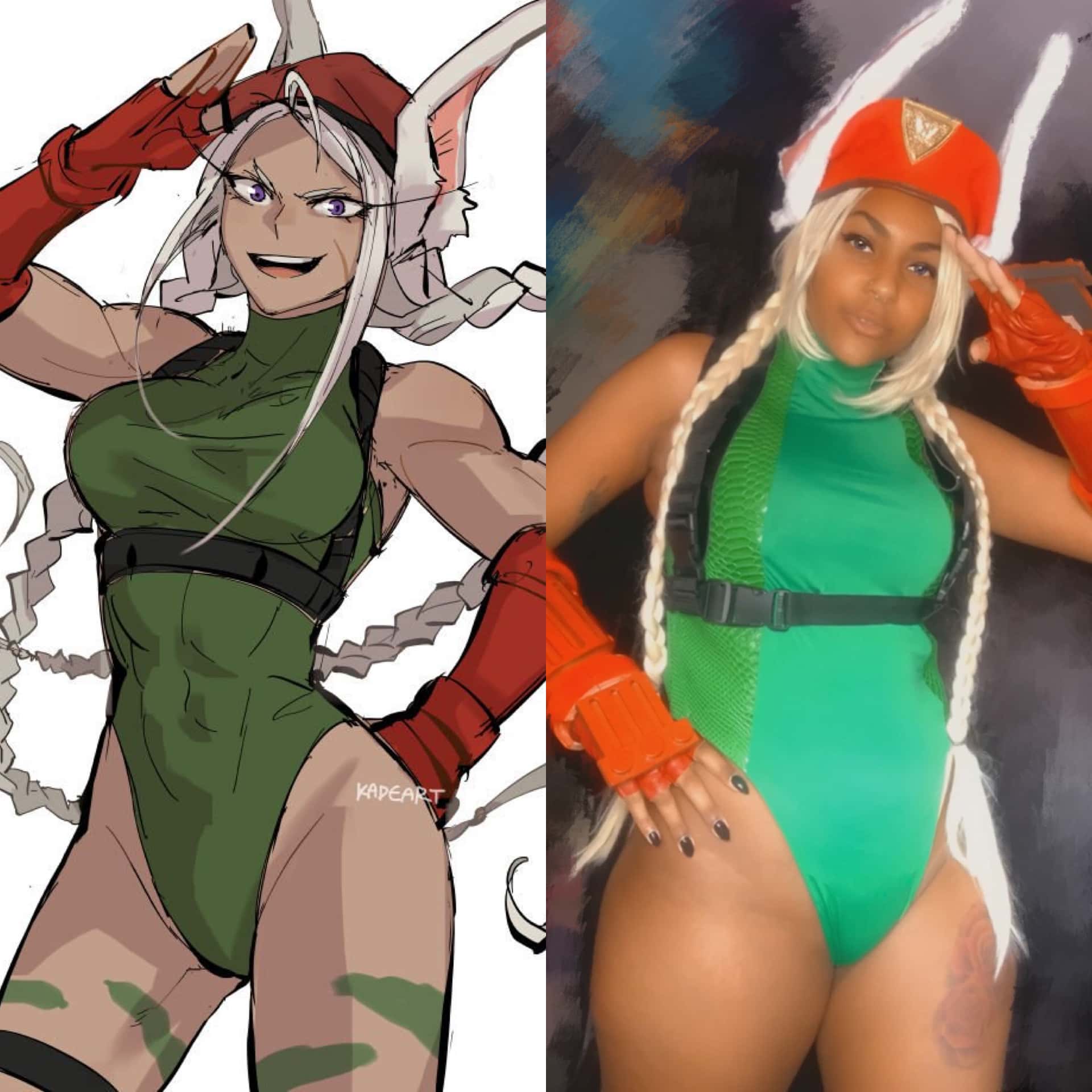 When I found out you can dress up on days other than Halloween I wanted to cosplay so bad! Also learning you can step out the traditional Superman onesie, cosplay with a twist & even create your own character in a sense I wanted to design my own right away. I finally got the opportunity to cosplay when I went to my first convention which was New York Comic Con 2015. Almost 5 years on & off but still going!

I use to mainly cosplay just for a convention or rave weekends. Thanks to Rona & now working from home I can cosplay more rather than waiting for those types of weekends. I try not to have a favorite butttt its Chun Li; because my dad picked that costume for me to wear when I took him for the first time to NYCC 2017 & the producer for Street Fighter signed the front flap of the cosplay & I was so happy for him to see what cosplaying looks like for a day.

I make a few things but mainly I buy little pieces here & there. I also buy custom pieces from friends who have small businesses of their own & a lot of Etsy sellers! My cyberlox is made by a UK company. I support all hands-on creators. Now with the extra time at home I’m learning to sew. I’m an art graduate so painting, sculpting and etc are easy for me. 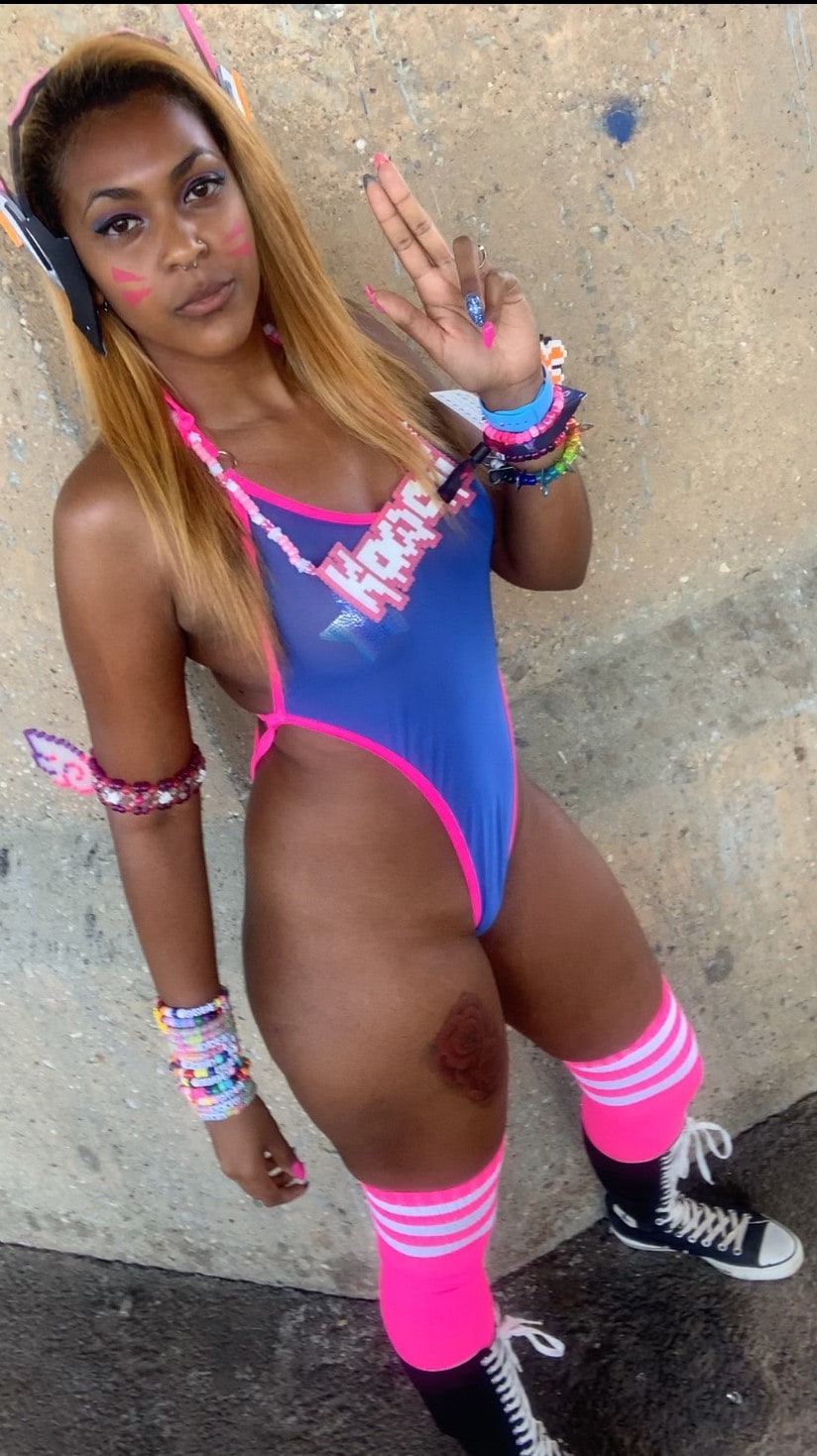 It’s wayyy too many to name & as the days go by I’m literally discovering more. They’re all my favorite, even the ones I just met. I admire how versatile cosplayers are nowadays who not only design and make their cosplays, but be their own photographer, editor, and more. 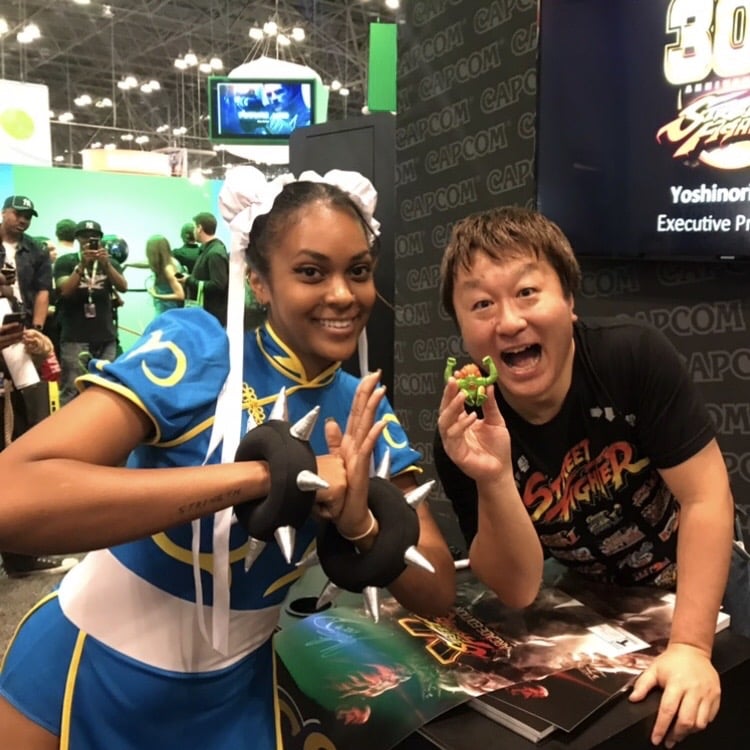 I’m known for my cyberlox outfits at raves, it’s what traditional underground ravers use to wear (like the ones from the dancing gif). I have turquoise Cheshire Cat, Sylveon & Gir. I sometimes put a twist on regular outfits, like DVA at Ezoo & Chun Li at Moonrise. I also wear outfits on my Twitch streams when we have stream parties or themed games. My dad has a blue antique Cadillac that I sometimes wear my Chun Li to match with it at Harlem Week here in NYC

Oh man… before Laura Matsuda was playable on SFV I rushed to the store to purchase the fabrics & materials to be one of first. I don’t know how to sew anything bigger than a hole in a shirt so making that whole costume from scratch was worth every accidental poke & glue gun burn in 2 days! 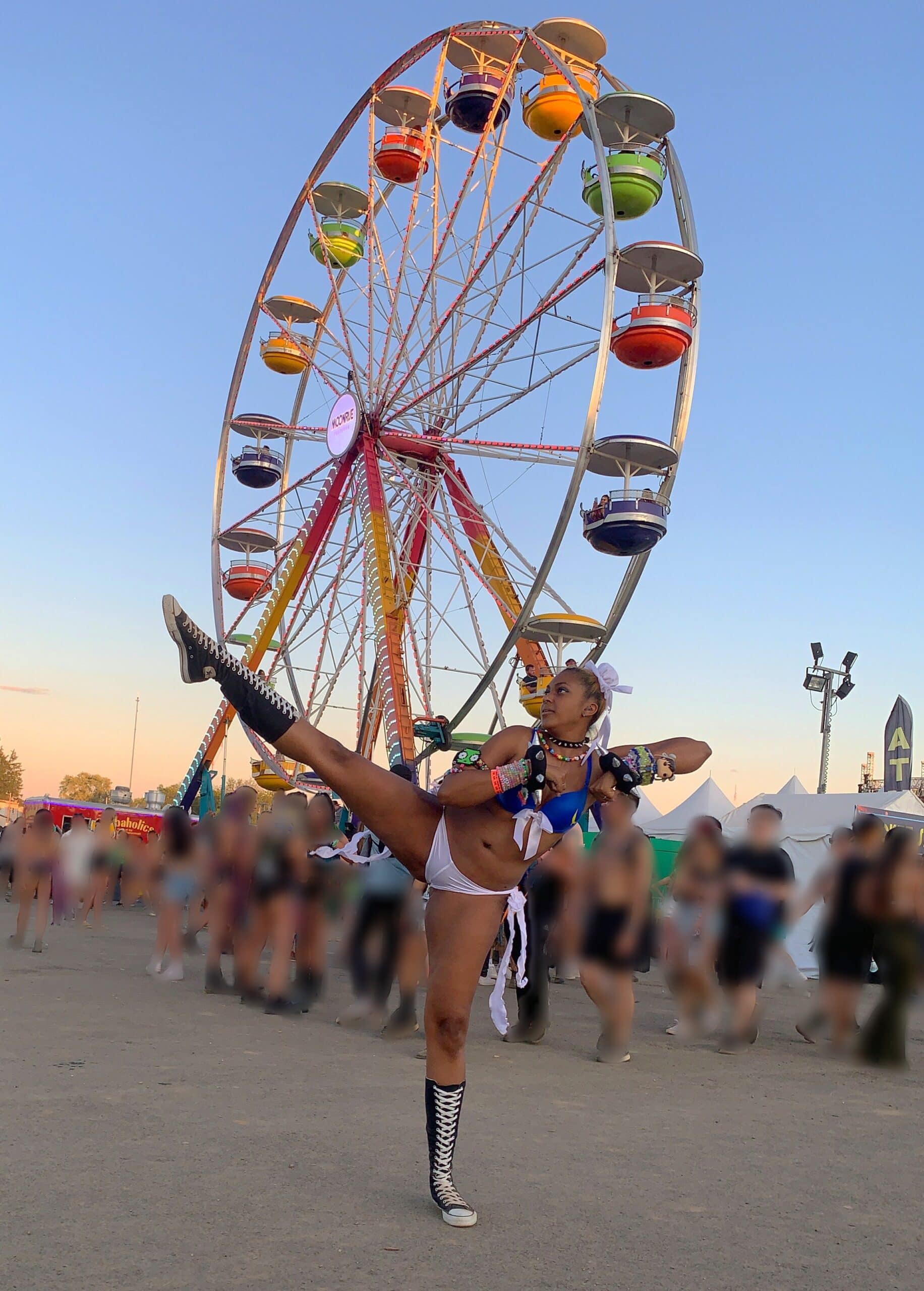 I wasn’t with a great group of people. It was too much drama & issues that resulted in me disliking cosplaying & drifting away because I was leaving people who were doing it longer than me who had helpful skills I could have learned & most of all a safe place to crash with at away cons. But with better friends, a mature mindset & great support I got back into it!

Firstly, my dad. He doesn’t know a single anime, game, or character (except Pikachu) I cosplay but he helps me sew, build & sometimes set up backdrops. He supports me to the fullest & I couldn’t be more grateful. & mostly social media! Your biggest support system can be 3 hours ahead in time or even a few miles away but the power & support of the internet from suggestions on shows to watch, places to get materials to even apps for editing. 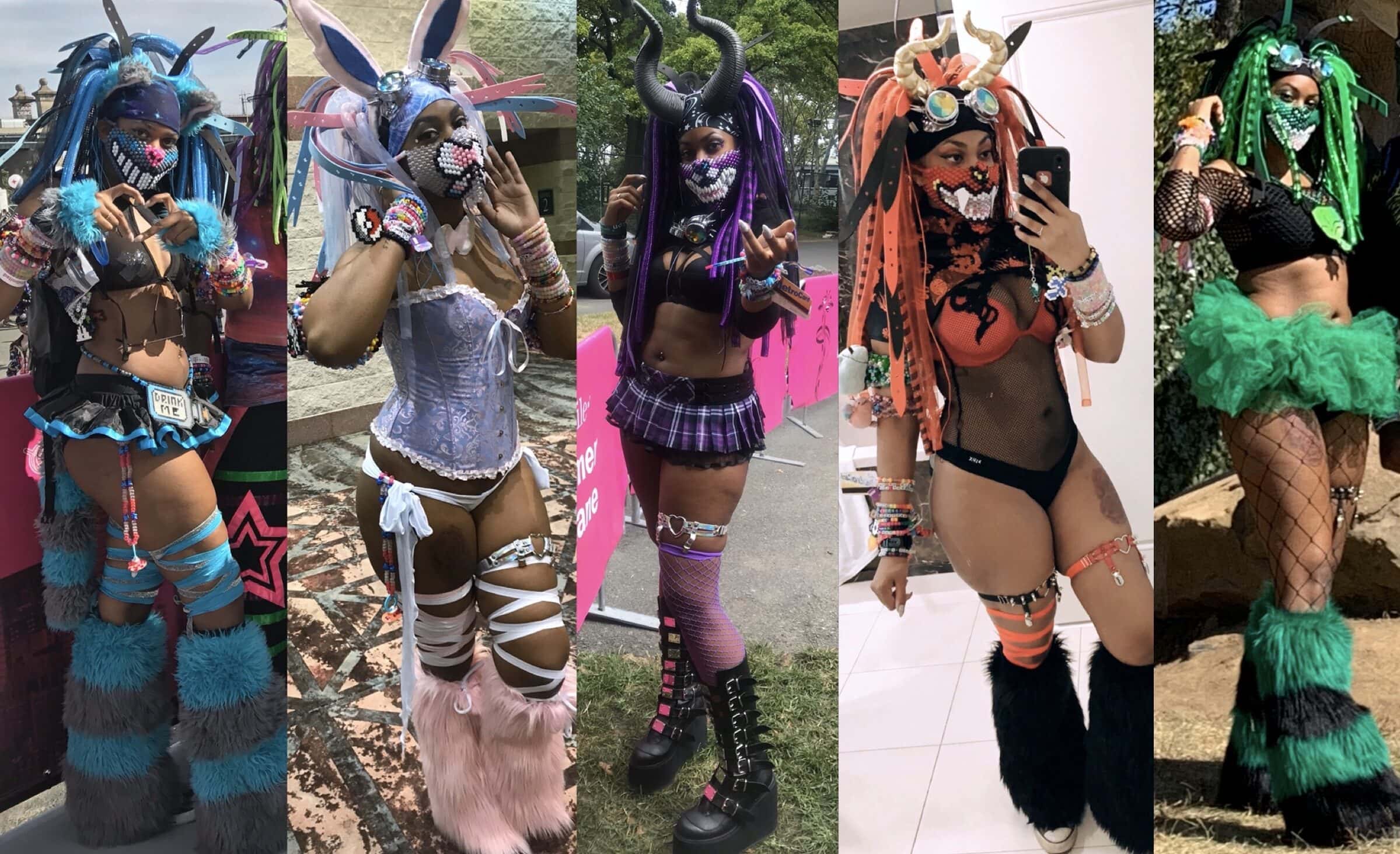 I’m rewatching Inuyasha & I’m excited about his daughter so I really don’t know who to cosplay from this now extended series. It might be everyone…

If you’re not following PUNK BLACK we’re gonna fight! jk Some like me got bullied for being an Alt POC or have a cosplay disrespected hearing the characters ‘not black!’; nope we don’t do that here. As my dad always tells me “everything you put your hands to will become greatness” & I pass this onto you all. Let it be your very first cosplay, a hair blog, first time at a metal concert, an outfit stepping you out your comfort zone, it’s gonna be great & within these communities, we can safely, happily & without a doubt do what the world says we can’t.