Skip to content
Recently we got the chance to interview the one, the only, and Atlanta’s very own Winter is Coming- a progressive metal band with a sound without limitations. In this interview, we got to talk about how the band came about, stepping outside of the box creatively, and rock music in Indian culture.  Check it out!
How did the band link up and come together?
We all met through Facebook and Craigslist.  The full answer is that it’s been a long process of filtering out all the wrong people to find the right people. Who are the right people? Nobody really knows until you try, and the ones that keep trying are the ones that you see now.
Who came up with the name for the band and where did it come from?
Winter Is Coming is obviously from Game Of Thrones, but we didn’t know that at first…? So my friend that came up with the name never ended up officially joining the band and none of the rest of us watched GOT, so we basically found out after we already started playing shows. Our fans really liked it and we liked it too so we’ve stuck with it ever since.

How would you describe your sound?

I would describe our sound as the dynamics of Periphery, heaviness of Fit For A King, and melodic leads of Children Of Bodom, all in a modern Metalcore structure. With that said, we try not to limit our sound while still maintaining the spark that makes our sound special.

Are there any different styles of music that you would like to incorporate into your sound?

We are currently incorporating more Electronic and Pop into our new music, but we believe that we will grow as a band by challenging ourselves to be open to any genre of music inspiring us to write great songs.

What’s a rock album that you can listen to from front to back, no skips!

A rock album we love as a band would be August Burns Red’s Constellations album. Every song is a banger and always gets us pumped for shows! 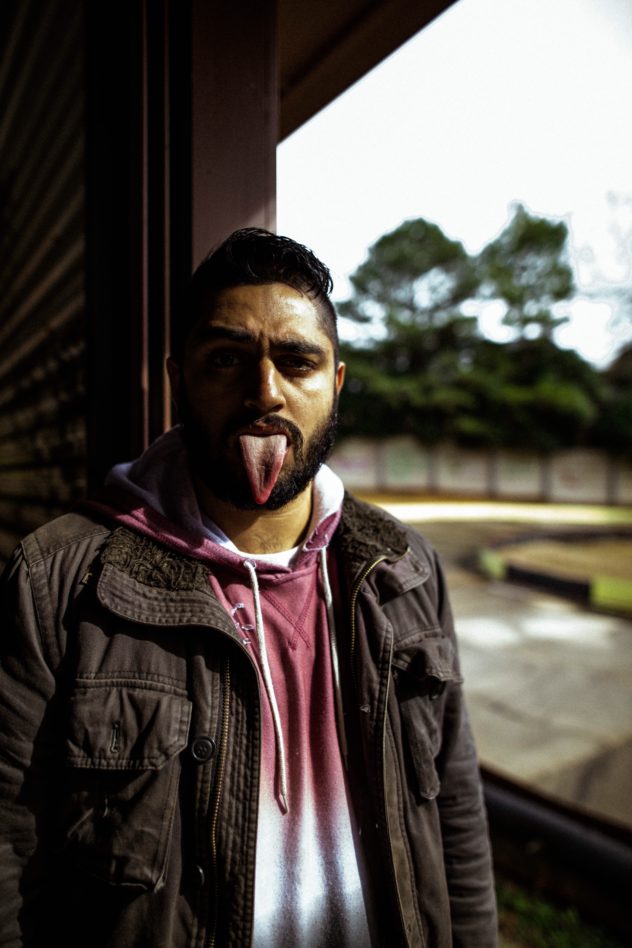 Now the frontman of the band, Moni Patel, is of Indian descent (Hindu)- is heavy rock music something that you see a lot of in your culture? If not, why do you think that is?
When people come to our shows I think they’re a little thrown off seeing an Indian lead screamer. It’s very heartwarming to have an organization like punk black recognize people of color because back at home in India Metal is not common. I strive for my culture to not feel their trapped in a box and open up to do what they love. There is no wrong or right way until you try for yourself. And no one should feel like they can’t do something because of their skin or race.

What can people expect from you in your shows?

Expect to headbang and get pushed into the pit while attending our shows. We strive to interact with the crowd. With our wireless set up we are able to play on top of bars, tables and in the pit! As crazy as that sounds you’ll have to witness for yourself.

What has been your favorite performance thus far?

Our favorite show this year was our Punk Black show in January!  Everyone was going crazy during our set list. We really feel the love at every PB show.

This year expect Winter is Coming to bring something the Atlanta Scene has never seen before.

Check out the latest badass music video for Winter is Coming for their new song ‘Degeneracy’ and also be sure to follow them on Instagram @WinterIsComingBand for the latest!