So let’s start with the easy stuff to get everyone acquainted with y’all. How would you describe your sound?

[all answers are by Tyler-Simone Molton, lead singer of Lesibu Grand]:

We’ve been trying to come up with the perfect description of our sound since we formed this project. Recently Afropunk described our music as “cyber punk” which we felt captured it well.  It’s a futuristic new wave vehicle with punk rock engine (and attitude).

How long have you all been together?

What does Lesibu Grand mean?

Lesibu is a family name that derived from the language Sesotho, which originated in Lesotho.  It is spoken in South Africa where my grandfather was born and raised. We put that name alongside the word “Grand” which we take to mean “something magnificent.” 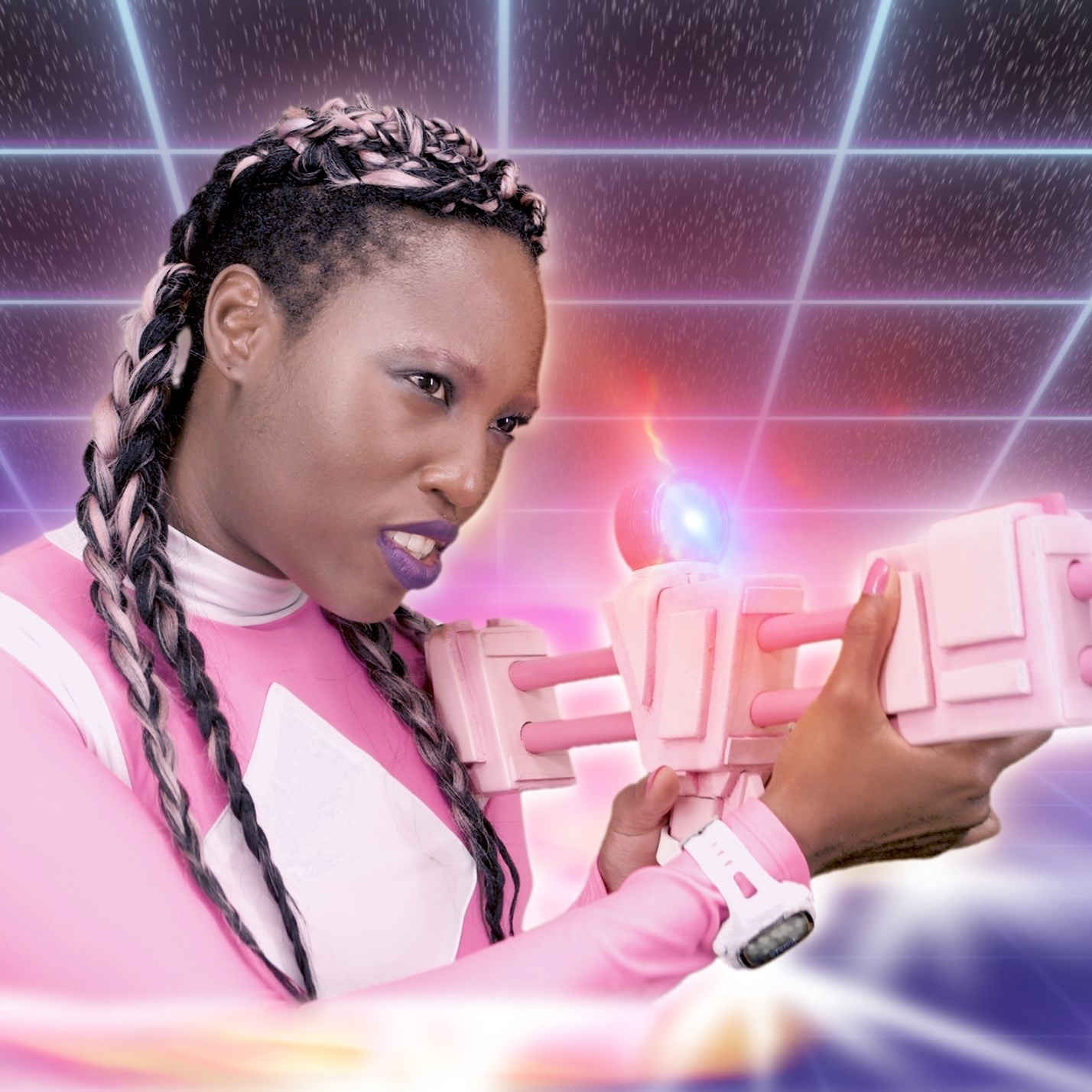 How did you come up with your name?

Bassist John “Hutch” Renaud, guitarist Brian Turner, and I had a long email chain of potential names and we began narrowing down that list, but could never agree on the best name.  Typical!  But, John always liked the name Lesibu and was pressing for that one-word band name.  I wanted something more, so we added the “Grand” because I call my grandmother “Grand Sandra”.  We eventually flipped the order and came up with Lesibu Grand.

How did you start?

John and I knew each other because my mom Tseleng Molton worked with him at Turner while I was a teenager.  Then, many years later after my mom had left the company and moved to NY, I bumped into John at The Pains of Being Pure at Heart show at the Earl.   We got to talking about music and he proposed the idea that we should jam together at some point. We were both in different bands at the time. Months later, I reached out to him and we met up for coffee to discuss how our project would look. John brought in Brian on guitar, and also Lee Wiggins on drums, and the band was up and running. 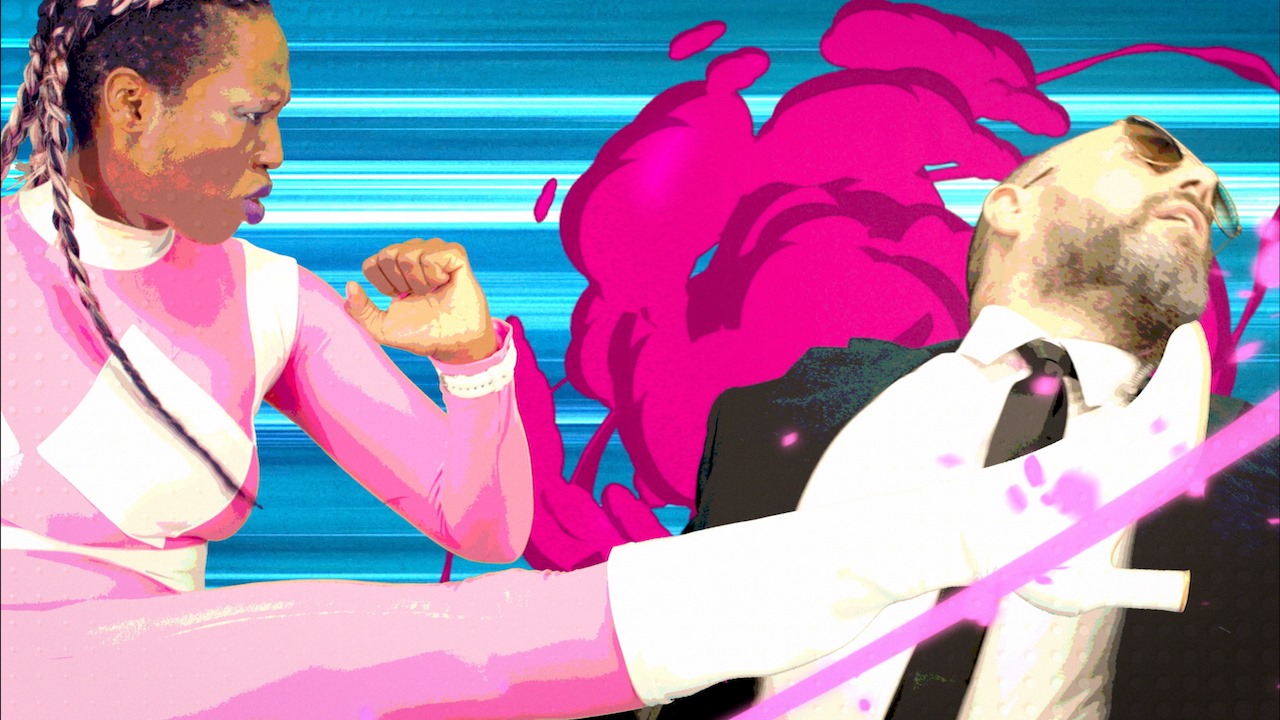 Now for some questions about your latest video for Hot Glue Gun. What’s the overall meaning of the song? Why the name Hot Glue Gun?

Hot Glue Gun is about fixing the many problems of the world using a simple tool. In this case, the tool is a hot glue gun literally gluing broken shit back together. The broken thing this song calls out is the American government and its corrupt institutions. “All systems down, and the guy running the show is a clown” can apply to many of the systems we have in a place like, the justice system, the police system, the education system, and many others that need reform. Instead of addressing these problems, leadership is either causing them, denying them, and/or making them worse.

But the initial idea of the song originated for a completely different reason. John and I were at Costume’s Etc looking for outfits for our Miranda video, and we found those two goofy space suits we ultimately used.  But there was a problem with the collar, and the woman at the shop said ‘just hit it with a hot glue gun…”   John had never heard of a hot glue gun before (which is kinda surprising) but he loved the sound of the name, and was intrigued by what that might look like. He started singing lyrics to the song in the parking lot. The rest of the song was written a week later. 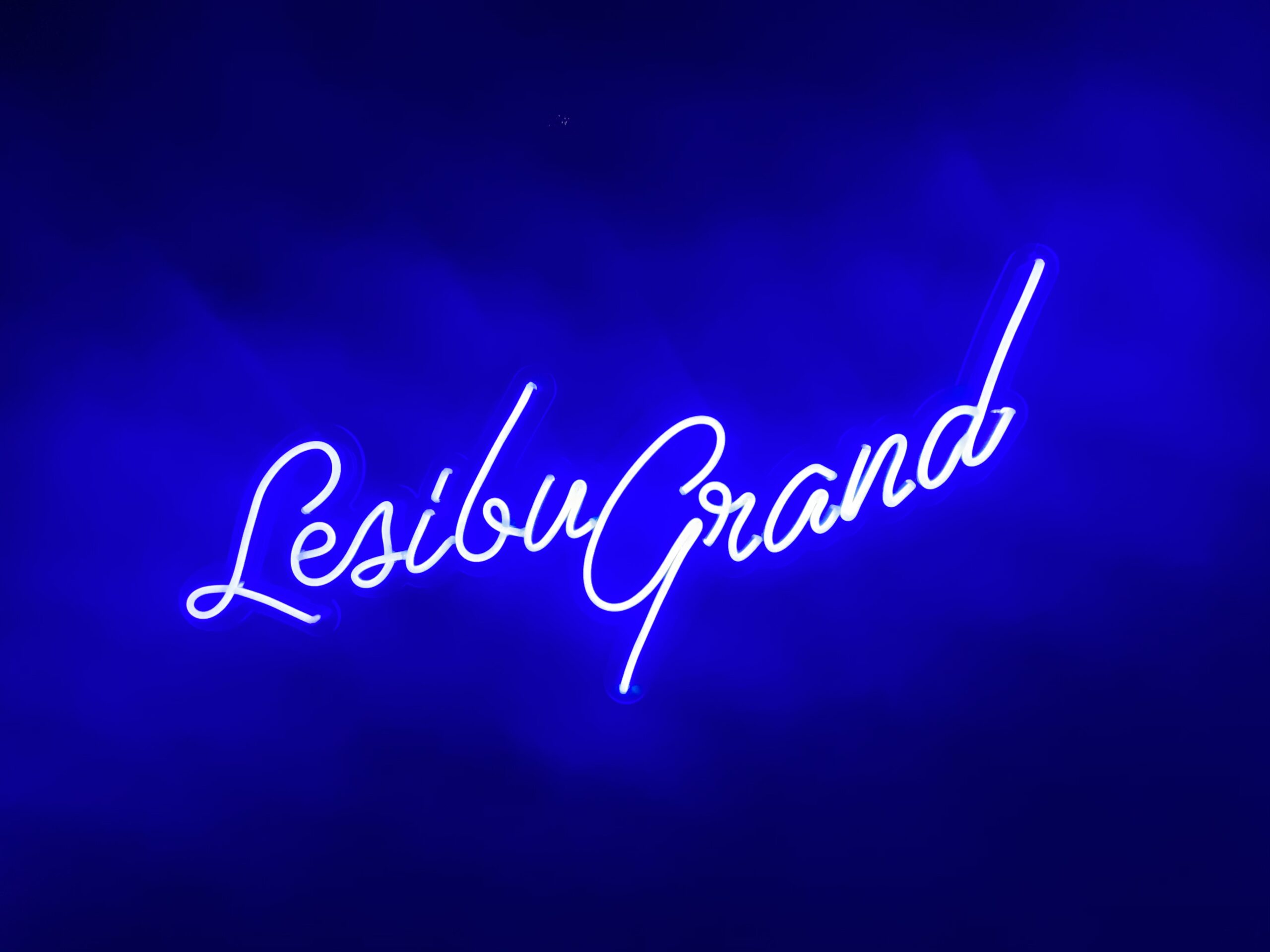 We noticed the representation of Trump in the video. Is the video set in a futuristic landscape where Trump (or someone like him) still rules with a nonsensical fist?

Yeah totally, it’s a futuristic landscape is a video game version of our real lives. The “Trump” character is more of a symbol of “leaders” like Trump rather than a depiction of the actual guy. This symbolic character is totally fascist, un-American, and a con artist who is trying to trick the world into thinking he’s on their side.

Is there a particular reason you all decided to go with a Power Ranger costume for the video?

Power rangers are the shit! I always wanted to be the pink power ranger when I was a kid and what better time to be one than in my own music video.

Where was the video shot?

In the intro, the video was shot at Joystick Gamebar on Edgewood Ave.  We shot the rest of it in John’s garage in front of a green screen. He’s got a little Hollywood studio in there!

Who edited the video?

Sailorface. They are a collective of directors, producers, editors, gaffers, etc, based in East Atlanta.  They also did our video for Jennifer, My Girl.  They do great work! 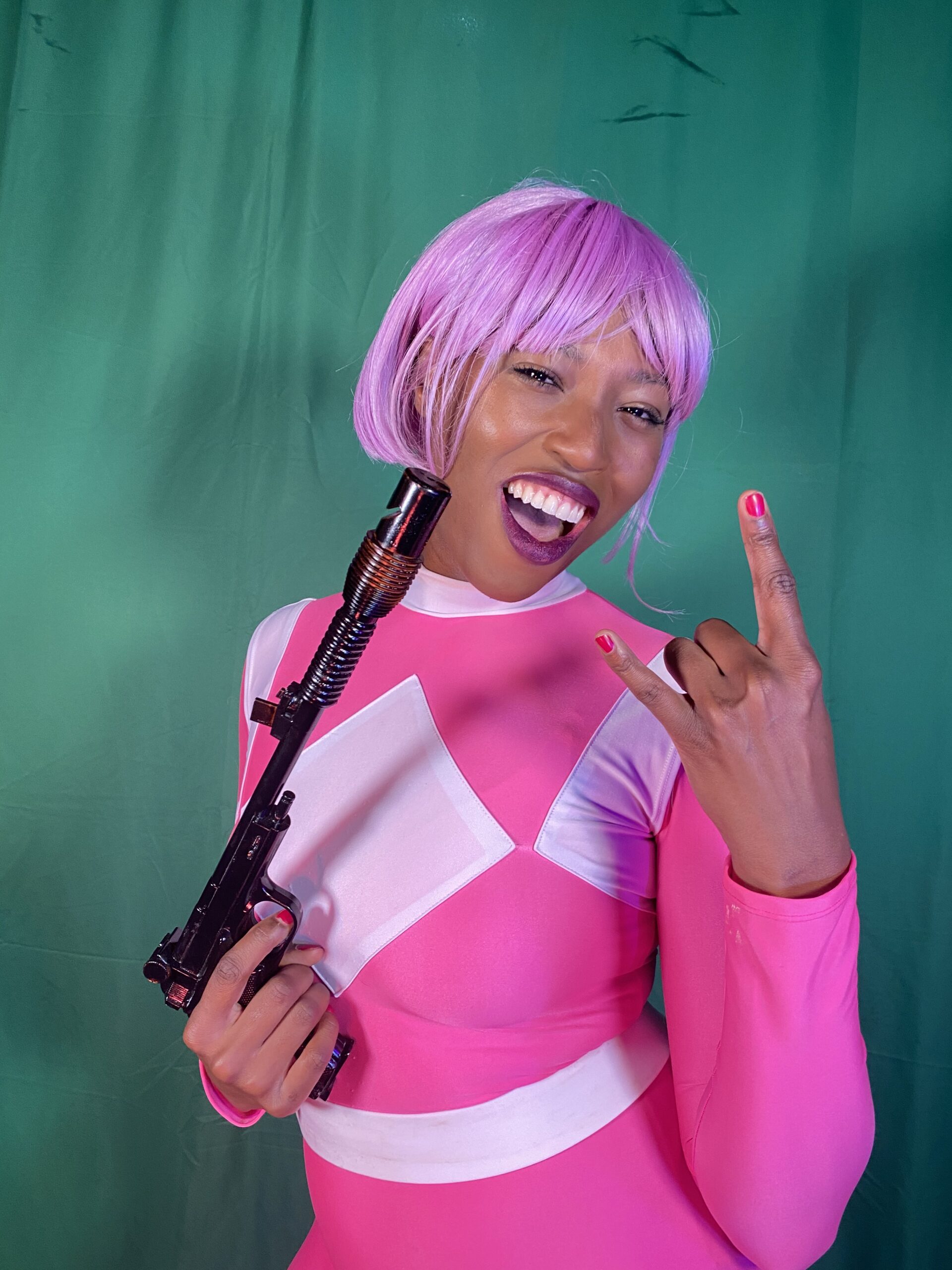 Will there be a continuation or sequel for the storyline depicted in the video? Keep tabs on us and you will see!

Was it difficult to record and edit the video during covid/quarantine?

The most difficult thing was being able to plan prior to shooting. The actual recording process was fairly easy because we were able to maintain mask-wearing and distancing. Each character was shot separately, and we got to wait outside when we weren’t needed on the set. The editing was an easy process since we typically communicate through email.

Any advice for bands and artists trying to record a video during these times? Keep it SMALL! Try to make scenes where there’s only one person in them at a time. Wear masks and try to have fun!

Is Hot Glue Gun available for all platforms? Yes, it’s available on Spotify, Apple Music, Amazon, YouTube, and just about everywhere else.  The video is on our VEVO account, not on our main YT page, btw.  We hope to combine them soon.

When is your next release?  We are currently debating whether to release Not Sweet Enough, which is about the attack on women’s rights in the South, or Heartbreak Blue, which is about the racism in early rock n rock amidst an interracial tryst with Elvis. Both songs are finished, but we want to make a video for them both, so we think it will take a few months.  April would be my best guess for release.  But, we have some fun remix versions of released songs in the works which will come out sooner.  Stay tuned!

Do you have anything you want the audience of PUNK BLACK to know?

I want every to know that our bassist John “Hutch” Renaud is the 27th best bass player in Atlanta and also once appeared on a rollercoaster in a TV ad for an amusement park. 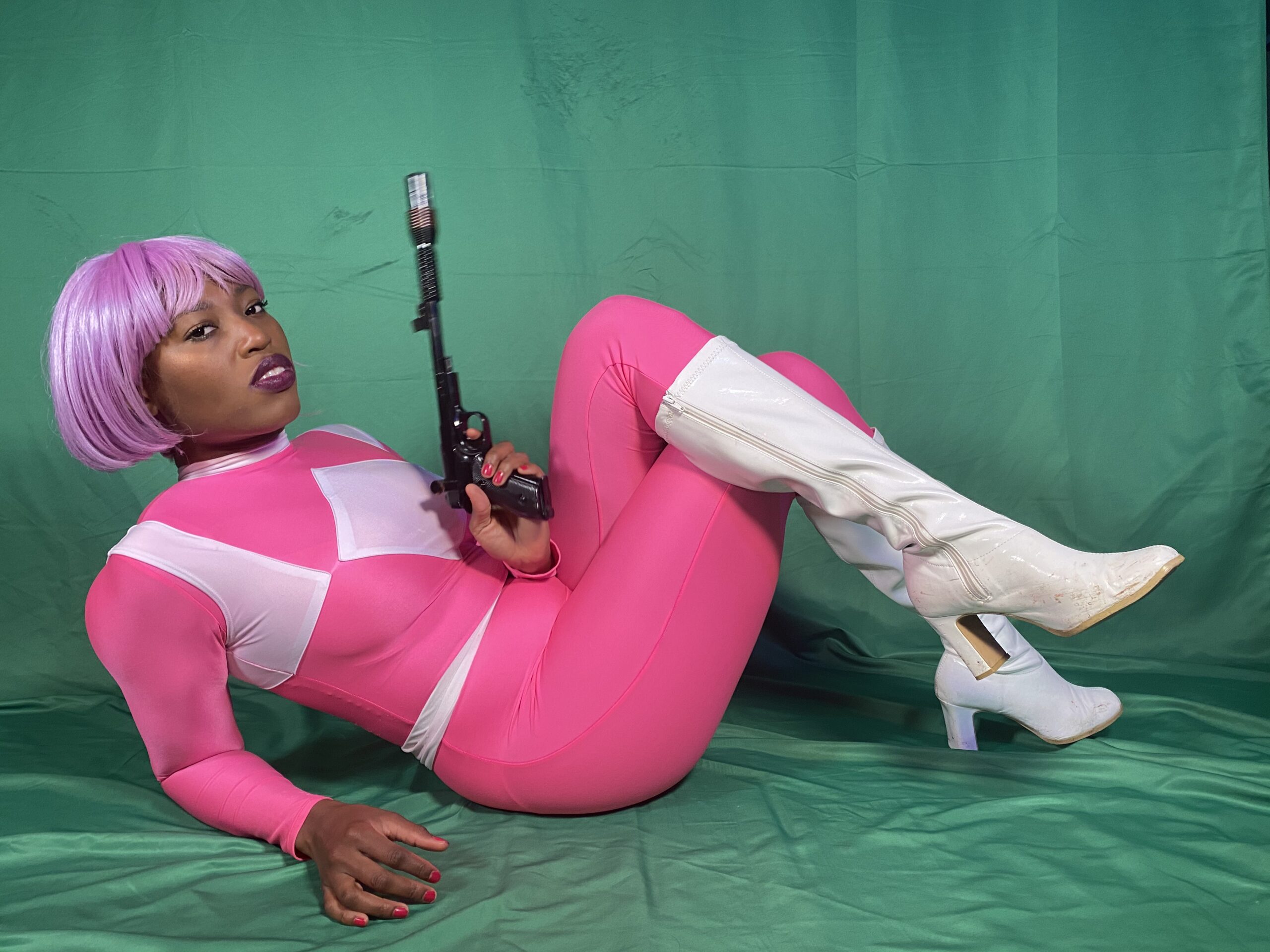